Have you smelt the Rose Centifolia (Rose de Mai) in Grasse? Well if you haven’t yet done so, I can take you on a short armchair tour of a recent visit to the fragrant fields of Fayence (in the Grasse area) where the sweet smell of  Rose de Mai was inhaled on a tour of the fields at the Domaine du Clos Notre Dame, owned by Alain Rebuffel  and his family. Following this a trip to the Firmenich processing plant at Tourettes was on the cards, thanks to Atelier Des Ors and Firmenich.

Prior to reaching the destination, I had visualised the morning’s activities, basking in warm sunlight and inhaling the beautiful scent of roses. Most of this came to fruition. Unfortunately the weather conditions were not as expected; it was raining so my mental picture of blue skies and beaming sun was not to be. However the rain was light and playfully created a layer of enveloping fresh dew on the fields. The vividness of the green landscape and the contrast with the  pink roses was a sight to behold. I’ll be honest here and tell you that the rain couldn’t dampen my enthusiasm or the beauty of the roses in bloom. And that scent!

Xavier Brochet from Firmenich was our host and thankfully he had brought a spare pair of plastic slippers that snugly fitted over my sneakers. I had fleetingly thought about taking gumboots but realised they were in storage, however the men arrived decked out in theirs. All I can say is that I was grateful for these plastic fantastics as it became quite muddy and slippery later in the morning.

I’ve been lucky enough to see the flowers in May two times now, although in different locations. My previous visit was to Domaine d’Olivine in Peymeinade with Au Pays de la Fleur d’Oranger, in a large group, but this was more personalised. And of course the scent of the Rose Centifolia is absolutely incredible and once with you  is  not forgotten.

The Grasse region is regarded as the home of perfumery and is known for the best Rose Centifolia / Rose de Mai in the world. Did you know that one rose bush produces approximately 80 flowers each season. That translates to approximately 300g. One ton of flowers makes around one kg of absolute. Note that Rose Centifolia can be found elsewhere, eg Morocco. It isn’t specific to the Grasse area but the condition of the earth and the climate (think terroir for wine), make the Rose Centifolia very distinct with a scent unique to the region.

At its peak production in the 1930’s, the appetite for naturals was unabated. Back then 2000 tonnes of rose petals were harvested. Today just 100 tonnes are processed in Grasse. This change has come about for a number of reasons. The advent of synthetics and the price differential for a synthetic floral composition compared to a natural from the region was one factor. Urbanisation and the need for land for real estate was another. Today Rose Centifolia is grown by small producers for the large fragrance houses such as Firmenich and Robertet but also for fashion houses Chanel and Dior. Alain and his family and others in the Grasse locale are preserving this long-standing tradition.

At Clos du Notre Dame grapes are grown for wine production, in addition to Rose Centifolia. The picking of the flowers occurs every day in the month of May (thus the rose is also known as May Rose or Rose de Mai), typically in the morning. This year the season has had a late start due to the wet weather conditions.

The rose pickers work in pairs and walk down the rows with sacks on their backs in which the petals are stored. The pickers need to work well together as they are with each other every day for the season. I noticed that the majority of the rose pickers were women,  although there were a couple of men present too. You need to be careful as you go down the row not to disturb the flowers and this is why the bags are worn on the back. The picking is done very quickly and then the sacks of rose petals are transported to the production facility nearby at Tourettes.

The Tourettes factory has a large cavernous space at the entrance where the plants and flowers are laid and given room to breathe before being treated. Xavier said that when the mimosa is brought in for processing, the flowers and branches cover the ground in many layers and their powdery floral scent fills the air.

A number of  flowers and plants are on the processing calendar from February to September.

The rose petals undergo the primary extraction method at Tourettes and the end result is the concrete or solid. The concrete is then further treated at the Grasse plant to obtain the absolute. To see, smell and touch the raw materials, and then to get a glimpse of  where they are processed was enlightening. 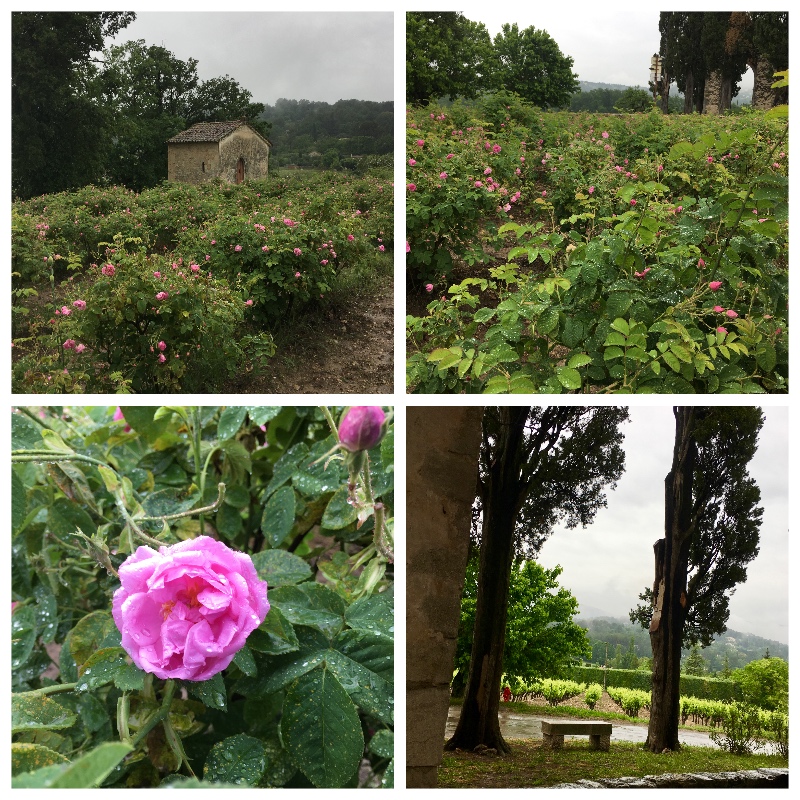 So how do the roses smell? The scent of the flowers is vivid and incredibly potent with a honeyed gloss. Rosy, yes but there is also a hint of a green vibration that suggests a fresh quality, while a vegetal aspect is also evident. The petals are very waxy and thus the raindrops glisten on the flowers that made for a picture perfect sight. The scent of hundreds of petals in the sack ready to be transported to Tourettes was absolutely stunning.

The raw beauty of the countryside and the incredible setting encompassing an old church, vineyeards, horses and stone buildings was simply magical. The simple table setting with drinks and flowers had such charm and beauty. This was in stark contrast to the factory where the potent smell of solvents dominated the scene. The factory visit, although without the beauty of the natural setting, made me understand what I’ve only  read about, and to see the machines where the raw materials are transformed into concrete, then absolute for use in perfumery is incredibly informative for anyone interested in olfaction. Seeing the production facilities was an opportunity not to be missed and I hope to visit again in the future with Atelier Des Ors and Firmenich.  If you have the chance to smell the Rose Centifolia in its Grasse habitat, you will not be disappointed. Just remember if you’re interested in this particular variety of rose to schedule your visit for the month of May.

Notes : All photos by Megan In Sainte Maxime