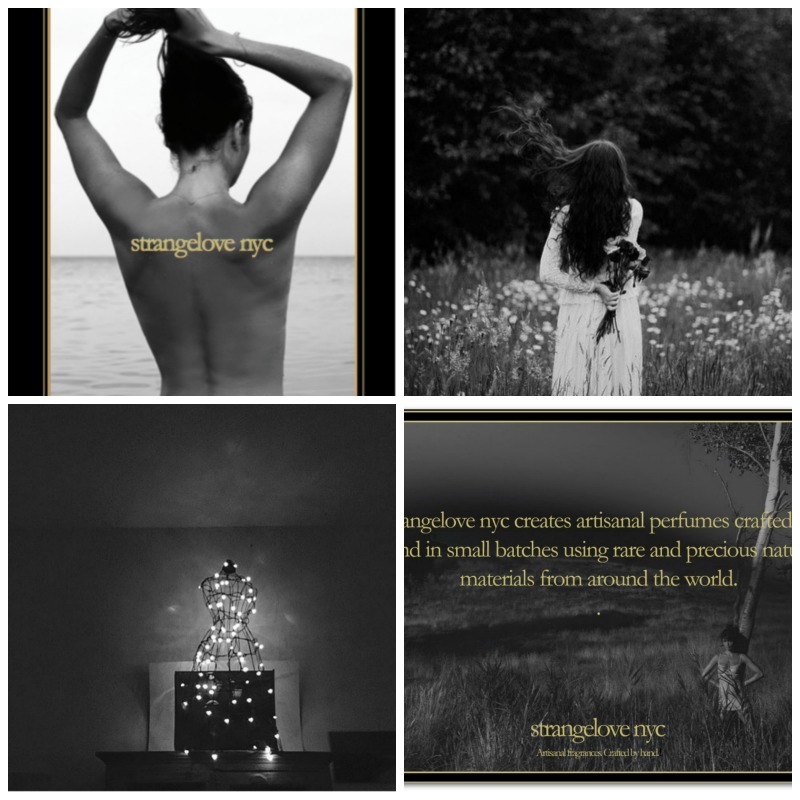 strangelove nyc is  a relatively new brand, launched in 2014 that injects a trendy luxe element to the perfume landscape. The range has three perfumes in its collection targeted at an affluent consumer but is also another brand to discover for those who are drawn to great fragrances with a twist that also incorporate beautiful packaging.

The strangelove nyc perfumes have been eight years in the making and are the brainchild of New York based Elizabeth Gaynes, who is a founding director of GaiaOne that develops sustainable oud plantations in Borneo. Gaynes is now also in partnership with Givaudan and grows patchouli and vetiver so has come to perfume via the raw materials so to speak. Helena Christensen, model and more recently photographer is the creative director. I have to say that when I heard she was involved I was more than a little intrigued. The black and white images for the brand evoke mystery with a beguiling sensuality and are Christensen’s work. The perfumer is  Christophe Laudamiel, who is well known and respected for his work that straddles the creative and commercial. He also creates in the art realm and I recently viewed an art work in Marseilles at MUCEM (Musée des Civilisations de l’Europe et de la Méditeranée) he had worked on entitled Jardin d’addiction that featured glass, metal and perfumed oils. He also created fifteen perfumes for the movie Perfume The Story Of A Murderer, based on the Patrick Suskind novel. Laudamiel also lectures and is represented by two art galleries, in addition to making perfume of course.

I had a brief telephone conversation with Elizabeth Gaynes and asked her how the team came together to work on strangelove nyc.

“I decided in 2012 to start something. Helena and I met on mums’ playdates .. and she was intrigued with what was going on. She wanted to be a part of it. She’s really creative and we started working together…. Another friend runs an art gallery and she represents Christophe. It was a good fit. We’re all a bit off the beaten path and don’t like to do anything that’s normal.”

Gaynes told me that the team works organically. Helena and Elizabeth will come up with ideas and talk to Christophe who’ll bring back samples and they keep going until it feels right. Or they’ll go to the lab and will later get on the phone together and go through iterations.

Gaynes is adamant that they create perfumes for themselves, and stay true to their beliefs in using pure and beautiful ingredients. She says that they’re confident people will find them because the perfumes are  “Different and distinct. They make a statement.”

It’s important for Gaynes to pay careful attention to their brand and they don’t want to grow too quickly. Currently they’re focused on a select number of retailers (Harrods in London, Bergdofs in New York, Bloomingdales in Dubai and Parfum Et Vous in Nice) and only want to be stocked where people will truly appreciate their perfumes. She talked about a slow evolution of the brand but they do have aspirations to expand to  Moscow, Hong Kong and Los Angeles.

The strangelove nyc perfumes all feature oud. The two fragrances I write about here  both contain oud but are very different in their take on this material. deadofnight positions oud much more to the front and centre and is the rare mix of being both pungent but also rather sensual. meltmyheart is a heavenly orris based fragrance with a twist of chocolate and oud for good measure. A third perfume called silencethesea is currently a Harrods exclusive but will be available in 2017 elsewhere. I have had a very quick sniff of this and it’s a stunning combination of ambergris, oud, lime and white truffle that smelt different to anything I’d tried before.

Christophe Laudamiel had this to say about oud where he compares it to a red wine (from Fragrantica).

“Real Oudh does smell very animalic. … It actually ventilates, like a good red wine after a few minutes to 10 min of spraying on skin. This is normal for good quality oudh, especially when not twisted by strong notes such as Patchouli or Rose, which would be one way of doing it ala Middle East.”

Now let’s take a look at the fragrances and please note that I am writing about the perfume oils, not the eau de parfum.

This is an oud that is pungently devastating but in a good way. The opening is what I would describe as fierce and rather barnyard and cheesy, yet soon after the staunchness  calms down. This admittedly may put some of you off, if you haven’t smelt real oud before. I’m quite hardy in the nose department so even though the first few times I smelt this I was taken aback, now it’s a smell that I’ve come to enjoy.

The cast of players in the scent lend a raw sensuality to the perfume, particularly the florals. deadofnight  comes across as a complex fragrance yet at the same time feels smooth and satisfying. The rose in particular shines here and works well with the spiciness. There’s also an ambered and musky facet that takes over with a very natural vibe.

There’s a strength of character to deadofnight that makes me feel like taking a walk on the wild side. At times I felt a little crazed and at others soothed and comforted. Maybe it’s a Jekyll and Hyde scent but it’s definitely not boring. Overall deadofnight has a soft sillage, although it smells very strong at first and finishes up being desert dusty. I’m also sampling the oil so it doesn’t have as strong a projection of an Eau de Parfum, it slinks on skin rather than diffusing widely. While you could wear this day or night, for me it’s more for night owls and sensual beasts after the twilight hours. It’s for hot summer evenings spent outdoors or for steamy moments in the cooler months. It’s definitely a scent that had me sniffing my wrist continuously and kept me intrigued from start to finish.

First here’s what perfumer Christophe Laudamiel has to say about meltmyheart.

“I’m really proud of this fragrance. When one hears that notes such as Oudh, real Dark Chocolate and Orris Butter are all ingredients in this precious oil, you know you’re in for an amazing sensorial experience. Add Ginger and Bergamot on top, Nutmeg in the middle and Sage Absolute as an undernote, you have a very mysterious potion. (Christophe Laudamiel)

This scent intends to convey the overwhelming feeling of falling in love and this is exactly how I feel about this perfume oil. meltmyheart is a seductive ode to orris gift wrapped in chocolate with a hint of oud. The chocolate is not too dark nor light. It’s plush yet casually sexy. The ylang ylang is prominent in the mix for me along with softly softly sandalwood. The star of the show is orris but it doesn’t pop out immediately, it takes a while for its star power  to shine through and reveal itself. When it appears it feels like an unspoken attraction. Even without words there’s an undercurrent of bristling energy that speaks volumes.

The entire creation feels silky smooth and smells gorgeous and not like any other  perfume I’ve tried before. It nearly verges on the gourmand but doesn’t quite get there. If I think of Amatys from Nabucco another oil based fragrance, meltmyheart is very tame in sweetness compared to this, it’s a much lighter style but still encapsulates that rich and luxurious feel. Interestingly this perfume oil lasts longer on my skin than deadofnight even though deadofnight feels like the heavier fragrance. meltmyheart  opens with a bang, then mellows to something approximating happiness.  What exists is a velvety caress of pure joy that I literally want to bathe in.

The brand sells various formats for each of its perfumes. These are not cheap thrills. strangelove nyc is aiming for the top of the perfume market price wise. They remind me, quality wise of Nabucco, another under the radar luxurious brand that make beautiful perfumes that also have steep prices. The strangelove nyc oils in my opinion are less spiced though, and not as viscous as the offerings from Nabucco.

strangelove is actually a very apt name for these delicacies. I do feel love for these fragrances and they’re anything but run of the mill. I can’t wait to also get to know silencethesea better and to see where the inspiration for this talented trio takes them.

The Low Down on strangelove nyc: Perfumes and oils that surround you in a state of bliss with a luxurious feel

For where to purchase : Please see the Strangelove nyc website for further details.

Disclosure : Sample gratefully received from Parfum et Vous in Nice. Opinions my own.

Notes : Images :  : All from strangelove nyc  except for Christophe Laudamiel : alumina.com and colour photo by Megan In Sainte Maxime.

4 thoughts on “Perfume Reviews : Dead of Night and Melt my Heart from strangelove nyc : + Words with Founder Elizabeth Gaynes”