Summer is racing by and I’m dying to enjoy every moment before it passes through and is gone in a puff of smoke. The town I live in is now absolutely heaving with people and even though I love the added energy the traffic is unbearable. That’s why you’ll see so many locals on scooters in summer zipping past the cars. Anyway without further ado here are a few favourites for July.

TV : I polished off a couple of TV shows last month. Stranger Things is a cool blend of an 80s kids show crossed with the X – Files. If you liked films like ET, The Goonies and anything with Winona Ryder you will love this. It’s surprisingly creepy while also coming across as innocent and of course very old school. The soundtrack is perfection. The 80s computer beeps and bops and the songs that are used definitely add to the general vibe. 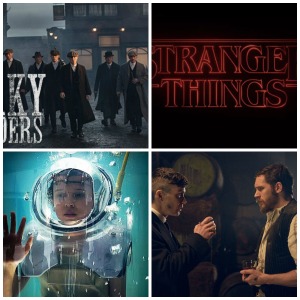 I watched Season 2 of Peaky Blinders and am often in two minds about this show. It has my favourite soundtrack on a TV series. Yes lots of Nick Cave and PJ Harvey. The dark musical tone really sets the scene. The fashion is cool too. It’s set in post WW1 England and the gang The Peaky Blinders are tough gyspy folk. It stars Cilian Murphy who is excellent and Tom Hardy has made an appearance in this season and he always plays crazy so well. I have two issues with the show. One is the over the top violence. The other is that it doesn’t quite have enough of an emotional heart to really hook me in. Anyway saying all of that I’m sure I’ll watch Season 3.

Film : Oh dear didn’t do very well here – I honestly can’t remember if I watched anything. Surely I did. Oh yes I saw Finding Dory at the movies. It was cute but fairly forgettable, although it did make a change from the kids usual superhero preferences.

Books : Patti Smith came back onto the reading list and I finished M Train. It wasn’t an immediate love like Just Kids but I became more and more intrigued as I read on. It seems Patti has a penchant for  the odd detective show and Scandi cop series. It is a meandering read but it’s well worth it. Lovely tales.

Music : I’ve been having a 70s summer moment. There’s a definite boho vibe in these parts so the music seems like a good match. Fleetwood Mac, Stevie Wonder, Nick Drake, Serge Gainsbourg …

Perfume : Lots of newcomers to the summer rotation. I have made a Top 10 summer perfume list that includes my favourites. I’ve also been testing perfumes from April Aromatics, Rainmaker from En Voyage and others. Reviews to come. I’ve really been enjoying how perfume smells in summer – it diffuses and seems to breathe well. Sometimes scents smell better in the heat. Chergui is just one of these that smell fabulous in warm conditions. I finally got hold of a bottle of Feminité du Bois in the vintage Palais Royale version, not the original Shiseido version though. I will be looking out for this. I also am dying to try Dilettante from Hiram Green. Sometimes perfumes don’t make their way to me easily. The lovely Liz Moores from Papillon sent me samples of Salome that flew all the way to France and back to the UK but never reached my house. Luckily I had a mule that could bring them over from the UK. The same thing has happened with Dilettante.  The first time it never showed up and on the second attempt it arrived but alas was broken. I’m hoping that the third time will prove lucky and reach me intact because what I smelt from the broken sample was bedazzling. I wanted to practically drink Dilettante. It’s a great orange blossom perfume, so yes hopefully soon.

Fashion : New Nike sneakers in an obnoxious mauve, the colour of the bougainvillea in the main image.

Travel : Nothing but a few day trips to the beach. Lovely times with my boys.

Of course there were two terribly tragic attacks in France last month. There is always sadness, horror and grief for those affected, for the lives lost and for the country I live in. Worry about the next attack is real and does change how you act in small ways. For instance I’m always looking for exits and escape routes and I never did this before.

Let me know if you came across anything interesting last month – TV, film, books, music, perfume, food or if you went anywhere uplifting, bizarre or odd. … And have a great August, don’t get sunburnt and safe travels.

Images : All Megan In Sainte Maxime except for the TV Collage : Images from the shows and YouTube