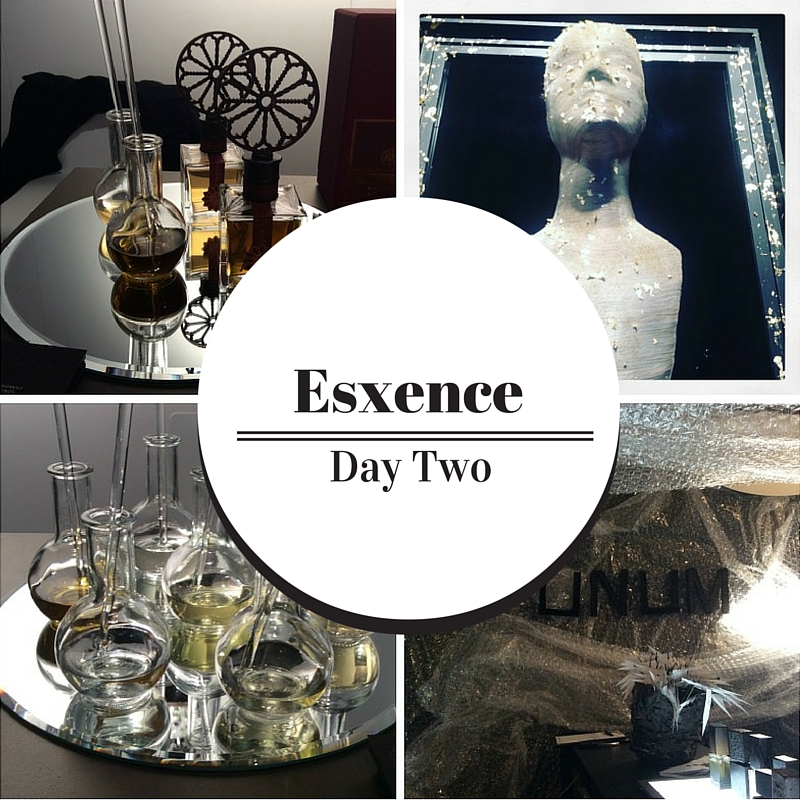 With a coffee hit or two I was ready to face day two at Esxence. First up was a session entitled ‘Building A Brand And Retaining Relevance’. I didn’t stay for the entire session but Karen Marin of Givenchy brilliantly steered the panel and the questions were thought-provoking and marketing focussed. In answer to the question “How do you create a clear identity and then communicate it to the end consumer?” Luc Gabriel from The Different Company talked about coherence and remaining true to the DNA of the brand. If one presumes that customers have only 10-30 seconds of attention, the simplest, clearest message is required.  Amy Nelson-Bennet from Clive Christian said that consumers want to be connoisseurs, so brands need to talk in a way that encourages this sentiment. If done well, perfume lovers will be able to tell a story about the fragrances they encountered to their friends at dinner that night. 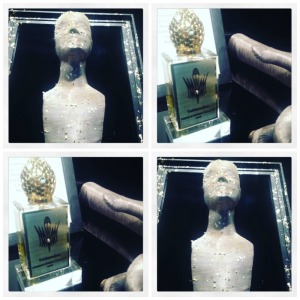 Then it was onwards to Stephane Humbert Lucas 777, one of the first visible stands at the show once through the entrance. His new perfume Taklamakan, named after the desert of death in Chinese  was a gorgeous, meditatively calm floating oriental with a healthy dose of cedar and smoky woods. It’s enjoyable rather than super challenging and will retail at the lower price point for the brand, at the same level as the divine Khol de Bahrein. The release date is scheduled for mid May. In further SHL777 news, best seller Soleil de Jeddah will be available in a 100ml size, in addition to the current 50ml. If you’re fans of Qom and Oud 777 then stock up as these are being discontinued. I couldn’t resist a few sprays of  O’ Hira and having an eyes roll back moment. Unfortunately  it’s priced a little beyond my comfort zone, however this beauty is a guaranteed compliment getter. 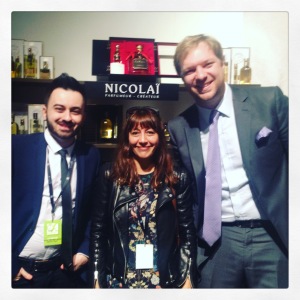 Next up was a visit to the Nicolai stand. I met the founder Patricia de Nicolai, her son Axel de Nicolai who now works in the business and Damien Flynn, (PR communications and sales). Oud Sublime is the new Nicolai perfume and contains real Cambodian oud priced at the eye watering 16,000 Euros per kilo. I’m not usually a huge fan of Western styled ouds (as they often end up smelling the same to me and not nearly half as good as the real thing) but this is a lovely, rather gentle interpretation accompanied by rose and coriander. Oud Sublime is available in the next two weeks. In other Nicolai updates, new coffrets are available, comprising a giant 250ml flacon with a 15ml portable, refillable spray. And if you’d like to know their best seller, well I’ll let you know that it’s Patchouli Intense. 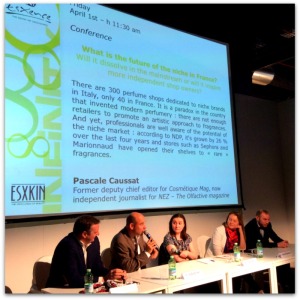 I headed back to the conference room to listen to a panel discussion on ‘What is the future of the niche in France? Will it dissolve in the mainstream or will it inspire more independent shop owners?” The first slide was revealing and I quote :

“There are 300 shops dedicated to niche brands in Italy, only 40 in France. It is a paradox in the country that invented modern perfumery : there are not enough retailers to promote an artistic approach to fragrances. And yet, professionals are well aware of the potential of the niche market : according to NDP it’s grown by 26% over the last four years and stores such as Sephora and Marrionaud have opened their shelves to ‘rare’ fragrances.”

I’ll elaborate on this in time but it’s rather sobering to see the French vs Italian retail difference so starkly illustrated.

Puredistance was the next stop. I met with Mary Gooding who is in charge of communications and PR. It really was a treat to see her again as she is so passionate about the brand and this shines through. Mary revealed some details about upcoming oriental perfume Sheiduna, that will bridge the gap between Europe and the Orient.  Mary promises that Sheiduna is about silent seduction but in an elegant way. I can’t wait to smell it. You can read more about one of my favourite perfumes from Puredistance, the calming White, one of my picks from 2015. 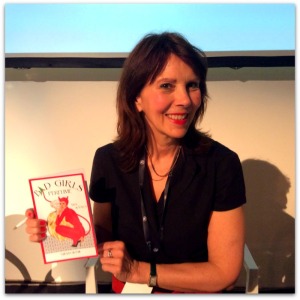 Next it was back to the conference room again for Sarah Colton’s release of Bad Girls Perfume. I’ve met Sarah before very briefly at Esxence and Pitti and warmed to her instantly. She’s an American journalist based in Paris and writes on the beauty and perfume industries. I’ll just say about the book that it’s a high-spirited romp through perfume land with 400 fragrances included in the text. I intend to do a book review when I’ve finished this bad girl. I have to say Sarah’s presentation was by far the most upbeat I attended, with Beyonce blaring and bubbles served at the conclusion. 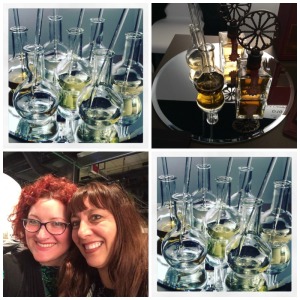 Next it was onwards to see the new perfumes from Angela Ciampagna. Angela’s Italian perfume house is very rustic and I enjoy her work, it’s artisanal and from the heart. One of my favourites from 2015 was Angela Ciampagna‘s Liquo, a liquorice and hay fragrance, that intrigues and fascinates. Angela now has two new extrait de parfums in a  collection entitled Cineris.

“For millennia now, every year before the winter solstice, the rite of Faugni takes place in the village of Atri. Fauni-Ignes is an ancient pagan and agricultural tradition that was adopted by Christianity over the centuries. This traditional rite of fire lights up the night until the break of dawn, when shadows are still thick.” (Angela Ciampagna)

For the fragrance Fauni (or Favni in Italian) Angela has macerated gardenia flowers for a vintage effect. The florals including jasmine and ylang ylang and the gardenia have a slight green tinge to them, and it’s a delicate yet very pretty scent that I’ve liked more and more each time I’ve worn it.  Ignes, is stronger in tone and utilises a Spanish tobacco absolute. It has a slightly rough opening with a rawness to the tobacco that smells like the real thing accompanied by patchouli up front. There’s a sweetness here too, perhaps from the Peru balsam that kept me sniffing my wrist. Both fragrances will be available in May. 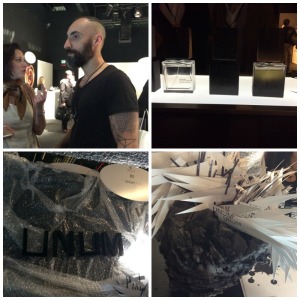 Next onto UNUM, an Italian brand directed by Filipo Sorcinelli. At Pitti last year his stand was a star attraction with branches representing the crown of thorns and puffs of fog emanating from the exhibit. At Esxence he’d covered the surrounds in plastic bubble wrap, that also captured my attention and contrasted with other stands that lacked pizazz. The bottles in the collection, now numbering five have been updated and are an improvement that align well with the overall gothic spiritual concept.  New perfume Ennui Noir translates to black boredom and the bottle is stark, with no logo. The story relates to an inside journey and the thought that boredom is not always bad. It’s a very soft, powdery scent that morphs into a light vanilla with flourishes of heliotrope and spice.  Symphonie Passion is based on a trip that Sorcinelli made to  Rouen in France, where Marcel Dupré (1886-1971) a renowned organist had once lived. When he visited the church that Dupré played at, it was closed but he found the guardian and rather poetically his wife was the current organist. Symphonie Passion is a dusty, vetiver and cedar scent that is rather vegetal in tone. 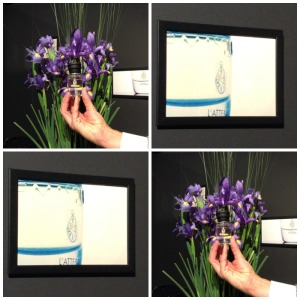 My final visit of the day was to Masque Milano and a chance to chat to Alessandro Brun and Riccardo Teschi, the creative directors. This is without doubt one of my favourite perfume houses and they are creating interesting, soulful work. It was very difficult to get into the stand. I must have walked by about 15 times, and it was always packed. They had a larger exhibit area this year, and were more explicit on what they wanted after the dancing mannequins fiasco at Pitti Fragranze. The area was set up as a lounge and not only was it more comfortable, it also meant that time could be taken to enjoy the fragrances. Romanza (now available) was one of my favourite perfumes from 2015 and the nose  Christiano Canali was there too, so it was great to put a face to the name. As you might be able to make out from the picture above, Masque have changed their bottles as they were looking for something more distinctive as other perfume houses such as Heeley are using the same flacon. They’re happy with the new look, and I can attest that it fits beautifully in the hand and feels special.

Their new release L’Attesa is signed by Italian perfumer on the rise Luca Maffei. It’s a really special iris and you will be in orris heaven with this one. Maffei utilises a champagne accord with a yeasty beer note and while this may make it technically innovative, the perfume to me smells timeless and elegant, yet full of character. I need to spend more time with this perfume, but this was my favourite of the day. It’s another strong offer for a collection that is going from strength to strength.

And that’s it folks. There will be one further post for my last half day spent at Esxence and then a quick run down of my favourites.

Let me know if any of these new perfumes pique your interest.

Notes : All photos by Megan In Sainte Maxime