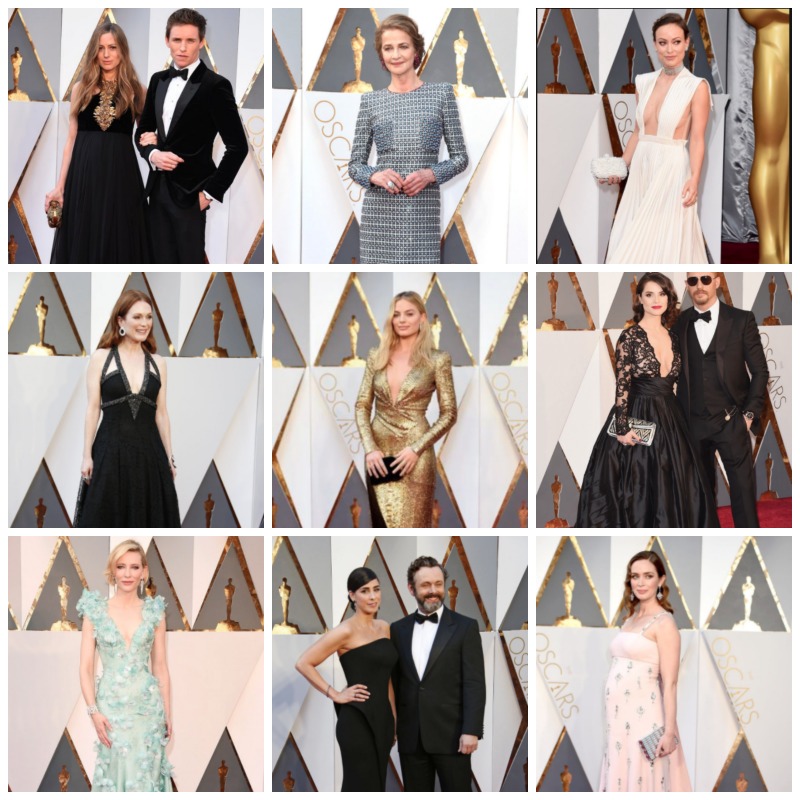 OK here are my picks for the 88th Academy Awards in terms of frocks and yes I know it’s very un PC to even be doing this these days. I don’t watch the ceremony anymore due to the time difference however thankfully it’s possible to youtube the highlights and miss out on the usually dreadful song and dance routines.

The frocks were a little below par in my non expert opinion. Charlize Theron looked stunning as usual – she even rocks the bald hair look in Mad Max  but I didn’t really love the red Dior dress.

My montage above features mostly black and we’re kicking it off with Hannah Bagshawe and Eddie Redmayne in the top left. She looked fab in a high-necked Alexander McQueen gown that covered the baby bump perfectly.

Charlotte Rampling who of course made the not so well received comments before the ceremony in a response to #oscarssowhite rocked her slimline Armani Privé long-sleeved dress. No Oscar for her though. She was nominated for her role in 45 for Best Actress but lost out to Brie Larson.

Olivia Wilde went for some old school glamour with a modern twist. Here she wears a white pleated Valentino gown with a plunging neckline that looked positively dangerous.

Julianne Moore played it a little safe in a lacy Chanel frock but still managed to nail it.

It could be said that Margot Robbie resembled an Oscars statuette herself in a funky Tom Ford gold number that contoured her body perfectly.

I loved the black dress on Charlotte Riley by Gauri & Nainika. A full black skirt and sexy low cut lacy top plus husband Tom Hardy on her arm and a perfect red lip – probably my favourite look of the evening.

The rather strange pale green Armani Privé mermaid dress on Cate Blanchett is slightly offbeat but generally speaking she manages to pull off anything successfully (but not the Oscar this year). She was nominated for Best Actress for her role in Carol.

I thought Sarah Silverman was slick and polished in black Zac Posen accompanied by Michael Sheen.

And a pregnant Emily Blunt looked radiant in this rather demure and delicate (not devilish) pink Prada gown.

And that folks is a wrap for another year.

What were your picks? Frocks and films.

9 thoughts on “Frock Up Ladies : It’s The Oscars”