Photographer Mario Sorrenti posted a photo on Instagram this week with a great shot of Kate Moss and himself days before the famous Calvin Klein Obsession photo shoot. That prompted me to do some further snooping around this iconic imagery and this is what I came up with. Here’s Kate Moss talking to photographer Nick Knight. 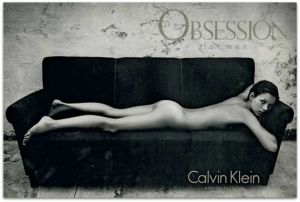 “Calvin was clever, he saw from the pictures that it was obsession, and it really was an obsession, … I’d wake up in the morning and he’d be taking pictures of me. I was like, ‘Fuck off!’ I lay like that [naked on a couch] for 10 days. He would not stop taking pictures of that. But, he’s Italian, you know? He was like, ‘Lay down, I’ll tell you when we’ve got it!’ We probably had it in the first roll. They rented us a house, just me and him and loads of film, in this deserted little shack on the beach.”

“We split up after that …. When you’re in a relationship with a photographer and they start abusing that relationship – and being like, ‘I want you to do this, and I want you to do that’ – it makes you go, ‘No’. I didn’t want to work all the time, but he’d be like, ‘Get up on the roof, take your clothes off,’ and I would think, ‘Fuck off!’ Now I understand that kind of thing a bit better, capturing an image, but at the time I was 17.”