Day Two at Pitti Fragranze was open to the public as well as buyers, distributors and press. As expected  it was buzzing. First up was Histoires de Parfums. This is a brand with some great perfumes up its sleeve. I have 1969 Parfum de Revolte in my collection, a feminine musky peach and patchouli but I really wanted to smell 1740 Marquis de Sade. I was certain this leathered spicy perfume would be a love due to the great reviews and the delectable notes list. And yes 1740 Marquis de Sade was as delicious as expected.

Gerald Ghislain, the founder of the brand talked about Fidelis, his new perfume launched at Pitti.  Fidelis is a high quality oud perfume bolstered by coffee and rose and is part of the Edition Rare collection.  Gerald also revealed he was working on an upcoming launch in a totally different style and was  looking at housing it in a blue bottle. The model he showed me was a bright Yves Klein blue. 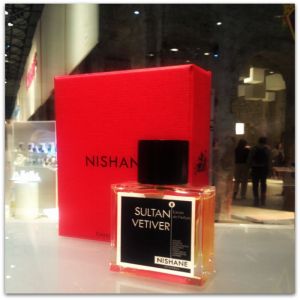 I finally met Murat Katran and Mert Güzel from Nishane who I had corresponded with but never had the pleasure of meeting. Murat took me through the range and exudes passion for his creations. Nishane  launched with sixteen perfumes. Usually this is not a great strategy and risks swamping the gems amongst the deluge. However I found that I liked many perfumes as I was smelling them. I need to spend more time with these but on first sniff Duftblüten was an early favourite with its riveting combination of osmanthus and incense. I also liked their Sultan Vetiver. This is a vetiver that works for me and this is not always the case.

It was great to catch up with Pierre Guillaume after meeting him at Esxence. As well as being a superstar perfumer who ensures creativity is a constant force in his work, he is a lot of fun to talk to. His new creation Shermine for Huitième Art,  is a powdered, furry iris and yes  it meets his typically high standard. It’s gorgeous. Huitième Art is one of the brands in Pierre Guillaume’s stable  and I asked him why he created the line. He explained that this is a transitional range for those moving through to niche perfumes before they hit his Parfumerie Generale range with its more complex nuances. I personally am a big fan of Myrrhiad from the Huitième Art line. I told him that I thought this was a simple, easy to love fragrance, perhaps not ground breaking but beautiful nonetheless. In response he said that Myrrhiad was actually a complex perfume to make, even if it doesn’t necessarily smell that way to the perfume lover. So there you go! 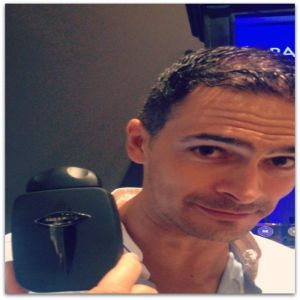 Guillaume was also showcasing Metal Hurlant a robust leather, as part of his Collection Croisière, a new range launched at Esxence back in March. (See Ca Fleure Bon for a review). He also passed African Stone the pungent fecal raw material under my nose. Very strong stuff! This is a component of Lumière Fauve, an experimental riff on L’Ombre Fauve, one of my favourites from the Parfumerie Generale line. Lumière Fauve is part of Contemplation 2015, Guillaume’s  capsule collection designed to encourage discussion. His other Contemplation 2015 scent was Leathermore, a potent, scrunchy leather. Hopefully he will release these at some stage, although they’re not for the faint hearted. They are however very good. 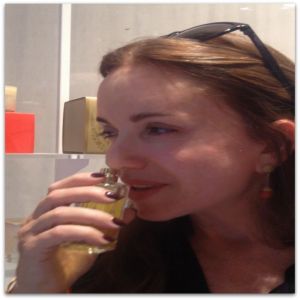 Linka Pilkington from Ormonde Jayne was as charming as expected and I was pleased to meet her, as I’m a fan of Ta’if and Tolu. I became acquainted with these two perfumes via her excellent discovery set that is available on her website. She works with perfumer Geza Schoen on the range. Pilkington’s new release is Vanille d’Iris and is definitely worth smelling. If you love both of these notes then I can assure you that this is the haute couture version. Decadent yet regal.

Eye catching Kristian Hilberg from Malbrum was in attendance with his next releases (not quite finished) on show. Kristian has continued his work with perfumer Delphine Thierry on new creations Wildfire, Bagheera and Safari 5. She was also the nose behind Tigre du Bengale, Shameless Seducer and Psychotrope, his debut perfumes. My favourite of the three was Bagheera, the sweetest of the trio. Yum. 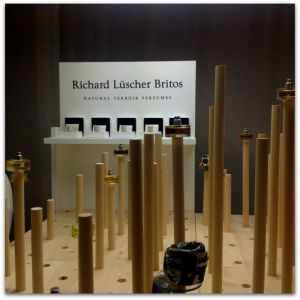 I spoke with Serena Britos from natural terroir brand Richard Lüscher Britos who have an amazing lavender perfume in their range entitled  44°N 03°E Causse Méjean from Andy Tauer. She showcased  an upcoming perfume signed by Delphine Thierry and set for release later in the year. The Moroccan mint theme was divine and I can’t wait to try the fragrance in its finished state.

Masque Milano have a new hit on their hands. The stunning Romanza by Cristiano Canali is narcissus rich and a great addition to this house that is going from strength to strength. It’s always a pleasure talking to Alessandro Brun, one half of Masque Milano. By the way the mannequins they had planned to use as their display were censored (pictured above). They had to remove them so their stand was very bare. Just as well their perfume was the talking point. 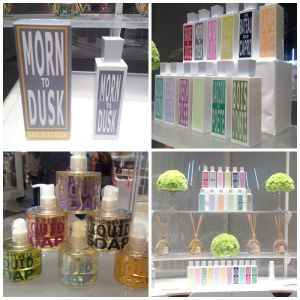 Eau d’Italie is another one of those brands that I had heard great things about but had never smelt. Husband and wife team Sebastian Alverez Murano and Marina Sersale were at Pitti with their new release Morn To Dusk from well known perfumer Annick Menardo that on me played out as a gourmand vanilla plumped up by a woody base. I’m a fan of the brand’s presentation in white containers with flourishes of colour. They also introduced new brand ALTAIA at Pitti. This is an acronym for A Long Time Ago In Argentina. To be featured in the Day Three Pitti report. 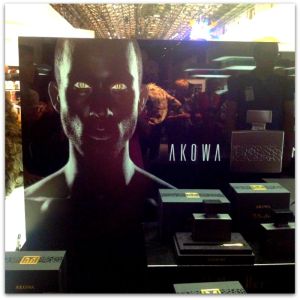 Parfums M. Micallef were in attendance. I discovered this range at Esxence with their very over the top fruity gourmand Ananda Dolce. It’s one of those perfumes that should have felt so wrong but I couldn’t help spraying it over and over again. It captivated me and I have to say it is just peachy, plus there’s plenty of almond sweetness in there too. Akowa was their Pitti release and I can assure you that this is the polar opposite of Ananda Dolce. Prepare to be surprised. 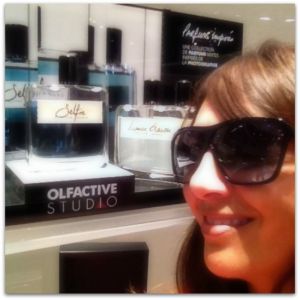 Selfie from Olfactive Studio is their second 2015 release, after Panorama earlier in the year. I confess I’m not a fan of the name. I enjoyed their Esxence release Panorama, a green perfume that has a particularly smart opening with a hit of wasabi, but Selfie didn’t have the same instant appeal for me.  Admittedly that was from one sniff, so I will definitely be trying it again. I did however take a selfie with the bottle.

Vero Kern proved a tad elusive in the Campomarzio area (the Italian distributor and stores area at Pitti). She was either swamped or on walkabout. However I did try all of her perfumes. They are a big love and each one is very special. After further testing of Onda Voile d’Extrait and Onda EDP one of these two delights will be my next vero.profumo purchase. I’m just not sure which one yet.

I do love Mortal Skin from Stéphane Humbert Lucas 777 and hoped that I would catch the man himself but alas to no avail.  Mortal Skin is gorgeous and actually I’m in lust with his entire range, particularly Khol de Bahrein, a gorgeous, iris with hints of violet that plays on the light side of gourmand. 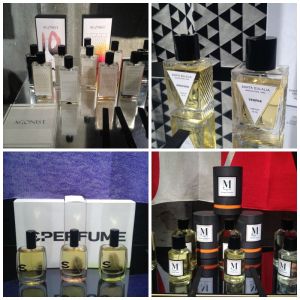 Onwards to the Unscent Land where Intertrade Group displayed their perfumes. According to their website this is :

“A play on nostalgia and memories among carousels and rocking-horses, crystal boules, cascades of popcorn, video and textual experiences, bubbles and candyfloss in perfume colours. Panels with extra-size tartan in jacquard textiles crafted in Italy, reveal artistic iconography inspired by brands that take part in Unscent, curated by Alessio Avventuroso, Design Director of Intertrade Group.

There were plenty of brands in the Unscent Land  such as Agonist, S-Perfume, Manufacture, A Lab On Fire and Santa Eulalia. For me the undisputed star was the fantastic installation in the centre of the room. Unfortunately when I visited there was nobody available to talk about the perfumes. With its art gallery feel it was undoubtedly unique, but  I missed the human touch.

I also had a chance to smell Rubini’s Fundamental that received a lot of buzz at Esxence. I loved the stand and everything about the presentation is spot on. I need to smell the perfume again but on first sniff it was pretty convincing and came across as a delicious concoction of champagne, fruits and sandalwood. What’s not to like?

It was lovely to see Ann Gerard at Pitti with her carefully edited collection. Her scents are well crafted and the bottles are fabulous as one would expect from a jeweller. I have Rose Cut in my collection and adore its silken boozy sweetness.  Bertrand Duchaufour is the nose behind her perfumes, and although she didn’t have anything new on show, I know she has something in the pipeline.

Some brands that were among the first players in the niche market were also at Pitti. These brands typically have wide distribution, so perhaps are no longer seen as exciting or ones to watch. I would put Annick Goutal and Diptyque in this category. Often these ‘older’ niche brands get drowned out by all of the shiny new toys these days, but they do warrant attention. Annick Goutal and Diptyque are still doing what they have always done well. 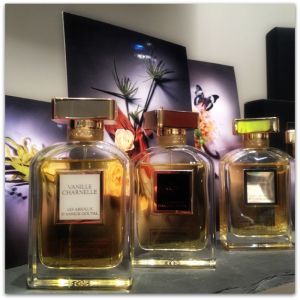 I’ve been a huge fan of the Annick Goutal range ever since I first encountered it at my local parfumerie. Their new Les Absolus collection is composed of three fragrances – Ambre Sauvage, Vanille Charnelle and 1001 Ouds and is priced higher than the regular line. The new Ambre Sauvage is beautiful but I’m not sure if it will replace my beloved Ambre Fétiche. Likewise, Oud Palao from Diptyque was a strong release. Yes it’s another oud with a rosy edge but the execution is spot on and I know one blogger who sprayed himself liberally and frequently with this one. Hello Chemist In The Bottle.

And that was Day Two done and dusted.  Stay tuned for Day Three featuring new discoveries. You can find more on Pitti Fragranze on Day One Let The Sniffing Begin.

Note : A version of this article has previously appeared on Ca Fleure Bon.

All images Megan In Sainte Maxime except for the Masque mannequins : Fragrantica.