An edited version of this article previously appeared on Ca Fleure Bon written by Megan In Sainte Maxime.

Etat Libre d’Orange (ELDO) have been releasing intriguing perfumes with provocative names since their inception nearly ten years ago. Etienne de Swardt, launched the brand with a punk rock sensibility and clearly has a talent, not only for curating a line of off beat fumes, but also for disruptive marketing that has created a buzz in the crowded niche marketplace. It’s slick and quirky, and there’s nothing quite like it. They have one much talked about fragrance, the modern masterpiece Sécrétions Magnifiques (Antoine Lie) that still pulses electric shocks of terror through some less intrepid travellers.

Remarkable People is another ‘mash-up,’ like True Lust; we have combined formulas from Joséphine Baker with a fragrance we developed which was never released. I have worked with my sister in the evaluation and I presume we have a good joyful scent inspired from past days of glory and “insouciance” with pink champagne on ice. “C’est une construction joyeuse”, positive, the art of celebration and seduction. Very much needed when reading the daily news ! Cecile Matton is roughly 60 % of the bouquet if you like the maths. The code name internally was “happy therapy”!

The marketing material talks about “the “un” people – uncompromising, unexpected, unconventional, unpredictable. We salute them, we honour them, by offering the extraordinary fragrance they deserve.”

I have to agree with de Swardt, that this is one of those happy, smiley face perfumes. It is not overly complicated and smells good enough to eat. Remarkable People has been not only a fun wear but also seems to lift my mood on each spray. It opens with a fizzy champagne accord doused in grapefruit that sparkles and shines with a hint of fun to come. Cardamom has a starring role and that suits me just fine. It lends a delicious spiciness that provides a contrast with what has gone before. There’s a touch of gourmand yumminess, reminiscent of that sugary stickiness on fingers when a lolly is unwrapped and popped in one’s mouth. You have the remnants of the sugar but not the full-blown effect.

There is a little jasmine here, but it’s quite a light touch to my nose. Listed in the notes is curry JE – Mane’s Jungle Essence extraction that apparently captures the true rendition of the original product’s aroma. Well don’t let this addition put you off. I can only detect a faint curried effect, this is certainly no Vindaloo by any means but merely adds to the laid back spiciness. The oriental styled base has a feel good vibe and settles nicely.  There’s labdanum, sandalwood and lorenox, which is an accord developed by Mane that can be woody, ambery, leathery and aromatic. It’s definitely woody in the drydown with a light amber and a twist of leather but nothing too overt. 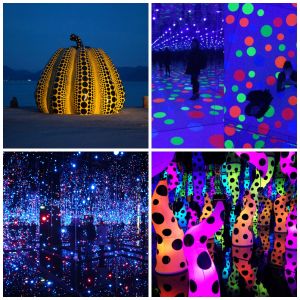 Remarkable People is an easy to wear, warm and comforting perfume. It has a smooth, rounded texture with a sweetness that reminds me a little of La Fin de la Monde, in that this is a deliciousness that works.  It’s  not too overpowering but makes you want to come back for more. This perfume doesn’t take itself too seriously, there’s a sense of dottiness and playfulness in true Yayoi Kusama style. Sometimes you can have a little fun with your perfume and smell great at the same time.

For where to purchase : Please see the Etat Libre D’Orange website for further details.  The 50ml bottle is priced at 80 Euro and the 100ml is available for 125 Euro.  Samples are 3 Euro.

Notes : Images my sample of Remarkable People : Etienne de Swardt : Cecile Matton :  All other images are of Yayoi Kusama and her work.