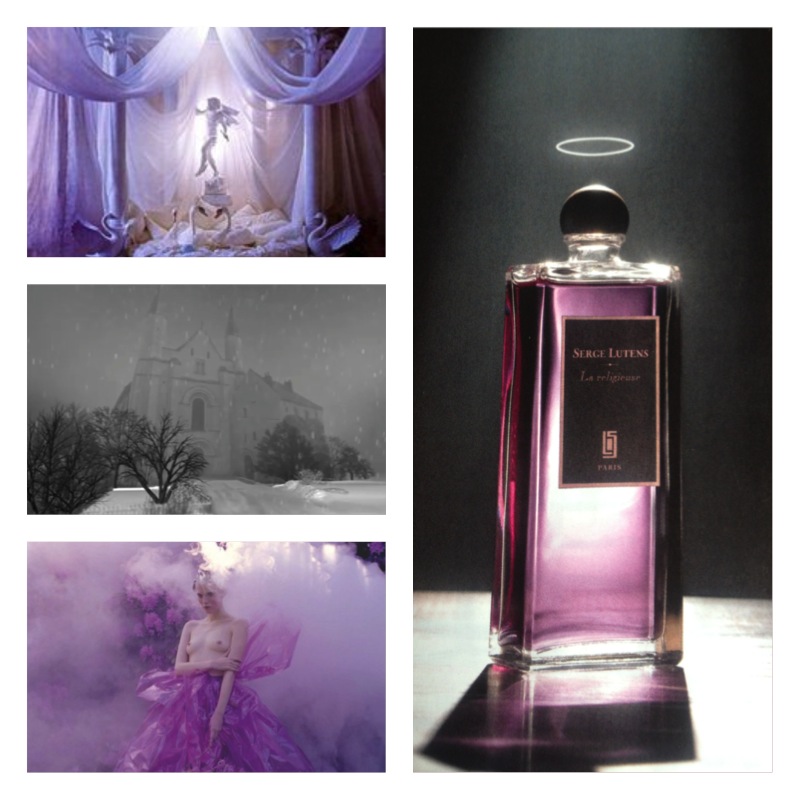 A version of this article has appeared on Ca Fleure Bon written by Megan In Sainte Maxime.

Serge Lutens is undoubtedly a master of creative story telling through images, makeup and perfume. He is a man of immense talents who loves an intriguing story as inspiration for his perfumes that magician Christopher Sheldrake brings to life. Lutens has traversed the heated, spiced Moroccan terrain and is now hiking through chilled landscapes with his more recent releases; the glassy, sharp post modern Laine de Verre and the icy L’Eau series. He has recently gifted us the unusual meditative L’Orpheline and his latest offering is La Religieuse, which in French means the nun.

When I first heard that La Religieuse would be a jasmine centric perfume it piqued my interest, more than just a little. Lutens already has two beautiful jasmines in his collection. The luminous gold standard A La Nuit is jasmine at its zenith. It’s a beauty that’s loud, screamingly bright, and sunny. It lifts the soul with its radiance and sparkle. The other is Sarrasins, an altogether different beast. Somewhat darker in mood and flicked with leather, it’s a suave and sophisticated take on the flower.

I wondered in which direction this jasmine would travel. When it was intimated that the perfume would contain incense and civet, my mind wandered and imagined a gorgeously ripe smoky jasmine in full bloom that would unleash disturbance, chaos and sleepless nights. I entertained a nagging doubt, however that this might not be the route he would take due to his recent creative terroir.

For La Religieuse there is much talk of snow, the colours black and white and of course religion.

“Deliver us from Good! Jasmine petals are as white as snow. Black is my religion” (says Lutens on the website).

But there’s more. In a recent interview, the master elaborated on this theme.

“Nuns for me are like snow: there is always something astonishing and magical about a pure blanket of snow yet it simultaneously provokes in us the desire to walk all over it and thus ruin its perfection”*

Perplexed? La Religieuse also refers to a delicious patisserie composed of two choux pastries – one larger on the bottom, the smaller on top.  Both are filled with crème pâtissière.  This configuration is said to represent a nun and her habit, figuratively speaking.  There is also the 18th century novel by Diderot with the same name.

Am I alone in thinking that Lutens loves the stories and visions perhaps more than the perfumes these days? Only he is capable of a back-story that fascinates or repels, intrigues or baffles. Either way, it’s never less than interesting, though sometimes it’s perplexing as well. Sometimes the story doesn’t mesh with the perfume. 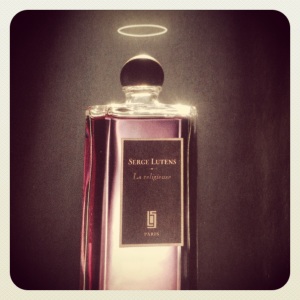 The perfume has a fragrantly sweet opening that paints an image in my mind of the pastry La Religieuse rather than snow or darkness. The initial floral folds appeal the most. There’s a touch of hyacinth and perhaps a sprig of mimosa. The jasmine is not what I expected. It lacks the confident strut of A La Nuit. It’s of a much gentler, slightly candied persuasion and tiptoes through the scent, timidly shedding its petals as the scent stays on skin. As the perfume meanders, the flowers are dialed down a notch and they’re cocooned in a musky, fluffy haze that adds a plush softness. There’s a slight artificial edge to the proceedings via the musk that edges it towards a clean soapiness.

La Religieuse is characterised by a shyness, and simplicity that sets it apart from A La Nuit and Sarrasins. It has an innocence, that won’t scare you or take you beyond your limits. This is not the striking, otherworldly jasmine I was fantasising about. It’s a more straight-laced version of my dream Lutens. It may however be the more popular jasmine as it is without doubt a safer choice. I’m still pondering La Religieuse and it’s a reported fact that other Lutens have grown on me over time. I wrote about Douce Amere and my change of heart with that beguiling bittersweet fragrance. Only time will tell whether I will come around to this light purple hued vision in a bottle and its hazy charms.

* Interview with Serge Lutens featured on the website scentury.com by Helder Suffenplan