Esxence was manic.  There were still so many stands to visit and I realised I was never going to get around to view and smell everything I wanted to. So my plan was to visit a few newish houses and discover some brands that were completely fresh to me on the left hand side of the hall (see my next Esxence post for more to come).

I smelt the new Jardins d’Ecrivains perfume, Marlowe, taking its inspiration from Christopher Marlowe the lesser known rival of Shakespeare. Marlowe is an interesting tuberose that I need to get hold of again, as in my general excitement I managed to pick up every sample from the range apart from this one. This was my first time smelling the scents from this collection and I was looking forward to it, as I’m a sucker for the  writers and perfume combination. I think Junky may be the most well known – probably due in some part to the name and the prickly allure of William Burroughs. After smelling the entire line my favourites were La Dame Aux Camelias, a Cologne de Nuit or cologne for the evening and George. La Dame Aux Camelias is a soft, alluring feminine floral scent with orange, violet, rose and a tonka base. George on the other hand is a tougher blend of tobacco, coffee and resins.

Another release from the house was Finca Vigía, a home diffuser. It’s 700ml in size so fairly large but it did smell absolutely divine. It’s named after Ernest Hemingway’s 19th century colonial home near Havana. The notes for the diffuser are listed as Cedrate, Flower of Banana tree, Mariposa, Jasmine, Frangipani, Palo Santo and Sandalwood. Anaïs Biguine, the founder of the house is also a classy vintage dresser, rocking a very cool boho chic style. 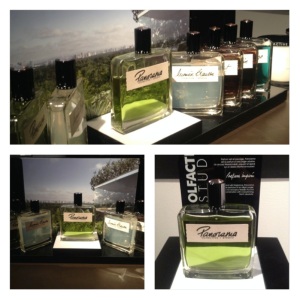 Celine Verleure the creative director of Olfactive Studio likes to tell stories via photos and the manifestation of these in scent. Panorama, the new creation takes its inspiration from  the Sheats House in Los Angeles. This striking house was designed by John Lautner, a Frank Lloyd Wright disciple. The photo used as the inspiration for the perfume was taken by Miguel Sandinha and features lush greenery with the cityscape in the background.  The perfumer is Clement Gavarry from IFF.

Panorama has a shot of wasabi upfront and is a softly hued green perfume. I think the wasabi angle could be seen as a bit of a gimmick but it’s an interesting perfume and comes across as fresh smelling before being lifted by the contrasting tones of myrrh and resins. It is actually more wearable than it sounds but perhaps not as spiced as I thought it could be with the mention of wasabi tickling my fancy. 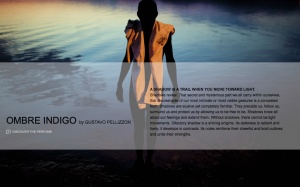 Ombre Indigo, shortlisted as a finalist at the Art & Olfaction Awards, was an instant love with its strong  leathery presence from the get go. It’s a strange mix of sweet and resinous that seems to work. Bizarrely it seems to remind me of a butched up Angel when it’s first sprayed. I love the photo that inspired this creation by Gustavo Pellizzon.

It was a pleasure to meet Nicolas Chabot from Le Galion and hear about the fragrances in the collection. This French house with pedigree was founded in 1930 by Prince Murat and sold five years later to Paul Vacher an esteemed perfumer who co signed Arpège for Lanvin with Andre Fraysse. The house was sold in 1980 to an American group and was mismanaged before disappearing. In 2014 Le Galion was resurrected and has some great scents in its collection. The new releases showcased at Esxence were Vetyver (a re-edition of its fragrance from 1968), Cuir and Aesthete. These two fragrances are new yet the intention is that they are recreated in the spirit of Paul Vacher. Of the two Aesthete is a more modern leather interpretation. A new collection entitled La Collection Singulière comprises three perfumes in concentrated version – Sortilège Elixir, Essence Noble and Sovereign. Of this collection, it is Sovereign that is an entirely new creation.  My favourites  were Vetyver and Sortilège Elixir – a lovely old school floral symphony. If you like perfumes like Chanel’s No 22 or No 5 definitely give this a whirl. I have mini reviews to come of this line.

One of the strongest collections launched at Esxence was from Jul et Mad with Les White, a trio of  lush, extrait strength oriental scents. Their three perfumes were Nin-Shar, Garuda and Néa. Luca Maffei signed my favourite Néa, a gorgeous pumped up floriental. Chemist In The Bottle has reviewed Nin-Shar.

Puredistance perfumes were new to me I have to admit. I had read great things about their fragrances and when I finally had the chance to smell them, they didn’t disappoint. Their latest Puredistance White, and the older Puredistance M really knocked my socks off. White is just a warm blanket of happiness. M is an exquisite leather. Both are must tries. 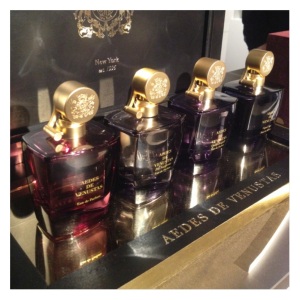 Aedes de Venustas was another house that I’d read a lot about but had never managed to get my mitts on.  This line is from a New York perfume boutique that has released their own line of perfumes.  I had a quick try of Palissandre d’Or their latest release and from memory it was good but I didn’t pick up a sample. I did get hold of samples of the others in the line and each perfume is interesting and well crafted.  My favourites were Iris Nazarena, an ashy iris and Copal Azur.  This is an incense with a watery theme, although on me this is very strong and can still be smelt the next day. There’s nothing wimpy about this one.

New brands at Esxence to come.

Notes : Images : All pictures mine except : Ombre Indigo from Olfactive Studio : Jul et Mad from Fragrantica : Puredistance from press folder