The travelling Jean Paul Gaultier exhibition : From The Sidewalk To The Catwalk  is now showing in Paris at the Grand Palais from April 1 to August 3. Paris will mark the show’s tenth stop on a worldwide tour that has crossed the globe from Brooklyn to Stockholm. 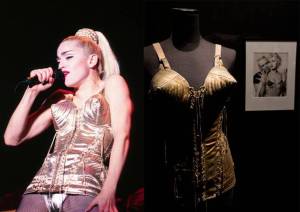 The exhibition houses 175 pieces of clothing highlighting his couture and ready to wear collections from his impressive career that spans from the 1970’s to now.  I remember his designs being very influential in the 1990’s especially when he created Madonna‘s wardrobe for her Blonde Ambition tour, including the famous conical bra, featured in the documentary film Madonna : Truth or Dare. Everyone seemed to be sporting bra tops on a night out or for daytime wear.

The multimedia experience also features hair styling from Odile Gilbert and apparently Gaultier was initially reluctant to hold a retrospective as he felt that clothes are to be worn not shown behind glass walls, although he has obviously come around to the idea.