The film starred Rosanna Arquette who had a handful of memorable roles in the 80’s including The Big Blue and After Hours, as well as a song named after her. Aidan Quinn was in it too, with those piercing eyes. It’s definitely Madonna‘s finest screen performance probably because she pretty much just played herself and only had about 25 minutes of screen time. She managed to make an impression though, no doubt due to that attitude and her fashion sense. The shabby chic vibe with the lace, gloves and the layering set trends across the globe. It took me a long time to get over my aversion to lace thanks to Madonna. 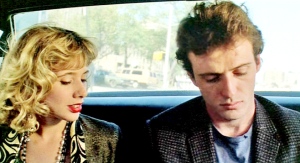 The scene when she dried her armpits under the blow dryer bizarrely is one of the most memorable in the film. It was carefree and sort of brilliant in its own way. She wasn’t yet a huge star but she was well on her way and between filming and the release date, her star had risen considerably.

She dances to her own song Into The Groove in a club. Killer pop.  The video for the track gives a taste of the film and a trip down memory lane.