Another French celebration occurred this week.  La Fête du Mimosa.  Well there’s not a lot of mimosa in evidence in our neck of the woods. There’s a scattering of flowers but not much of a presence as yet. 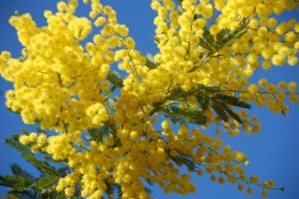 Mimosa  is a yellow flowering plant, introduced from Australia (known there as ‘wattle’) in the mid 19th century. The yellow blooms are a visual treat and provide much needed colour in the cooler months. The annual parade took place on Sunday and there is always evidence remaining the next day of its presence, with sparkly stars and mimosa strewn across the streets. I didn’t get to see the parade this year but here are a few photos of previous mimosa parades.  The interesting thing about this parade is that it doesn’t seem overly ‘French’ as different cultures partake in the celebrations, witness the skimpily clad Brazilian dancers, surely a tad chilly in their eye-catching garb. 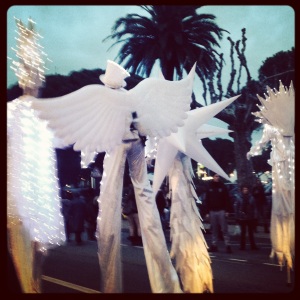