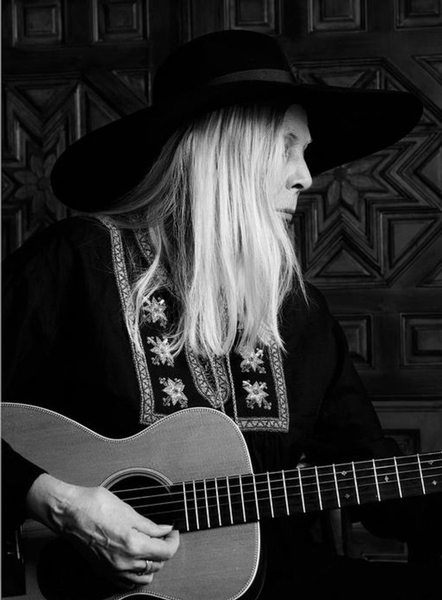 Since Hedi Slimane was handed the reins at  Saint Laurent, (yes he famously ditched the ‘Yves’ fairly quickly for the fashion collections) sales have increased due to the popularity of his retro referenced clothes that are luxe versions of what’s on the high street or the type of clothes that French gals have worn for eons.  To me he is not really offering anything innovative, but he does make it look effortlessly cool while relentlessly plundering that rock chic aesthetic. He’s also a photographer and likes to use musicians in his artwork.  The latest in a long line of musicians that he has photographed for Saint Laurent Music Project  is Joni Mitchell in a Woodstockesque way that perfectly showcases the 70’s fashion moment that is currently all the rage. Music doesn’t have age boundaries in quite the same way that fashion does.  Fashion campaigns are prone to feature the young and nubile, although this year Celine has gone against the grain and collaborated with writer Joan Didion in their latest campaign, and now we have Joni.  I do love Joni’s music and Slimane’s black and white photographs he takes of musicians.  I really admired his Kim Gordon (Sonic Youth)  photo that sees her look straight to camera in a strongly assertive but natural way. A ripped out copy from a magazine takes pride of place on the fridge at home.  Joni Mitchell is critically acclaimed but hugely under rated by the general public.  Music reviewers get her but her vocals hold more of a feminine appeal that doesn’t seamlessly cross over to masculine tastes.  OK could be a huge generalisation but there you go.   I’m hoping that Slimane‘s use of Joni Mitchell will help expose her to another generation.  Big Yellow Taxi, Blue, Both Sides Now ….. Biopic long overdue.

3 thoughts on “Joni Mitchell : Will Saint Laurent Music Project Bring Her To A New Generation?”