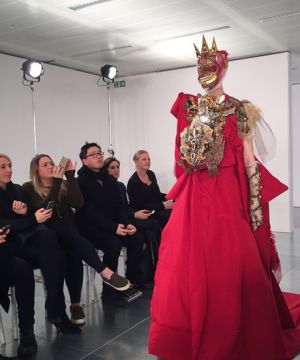 After a spectacular fall from grace, John Galliano has been working on his recovery and rehabilitation since he was filmed making an anti semitic ass of himself in 2011.  Dior promptly fired him and it really was a huge fall.  Galliano was a theatrically brilliant designer, and a showman himself, often appearing at the end of his shows dressed in completely over the top pirate costumes and the like.  The fashion world seems very tame and a little pale after his banishment, particularly coupled with the loss of Alexander McQueen who was a fashion great. 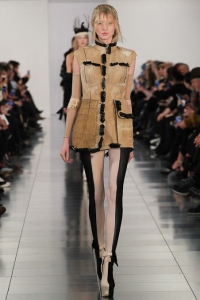 Anyway Galliano is back.  He’s designing for Maison Martin Margiela and on Monday showed the Women’s Artisanal collection in front of 100 friends and family in London.  It’s a strange match up – the over the top style of Galliano with the more intellectually sober Margiela.  His loyal friends were in attendance, Anna Wintour who apparently has supported him from the beginning of his career, and Kate Moss who was running fifteen minutes late and they held everything up for her.  She also was there for him when nobody would give him work and he designed her wedding dress.  It was a divinely romantic creation.

Galliano came out at the end of the show in Margiela’s white lab coat – a far cry from his days as the theatrical impresario for Dior.  His look is very much changed now, he is unadorned and looks more gentlemanly.  I’ve seen the shots from the show and there is definitely some old Galliano in there but a dialled down version, although I imagine that if you’re a huge Margiela fan this work may not be your cup of tea.  I thought it looked interestingly theatrical – a real marriage of the two aesthetics.  Time will tell if the buyers will come back to Galliano and the Margiela lovers will stay.

Images : Red Dress from refinery29 : Other image from style.com