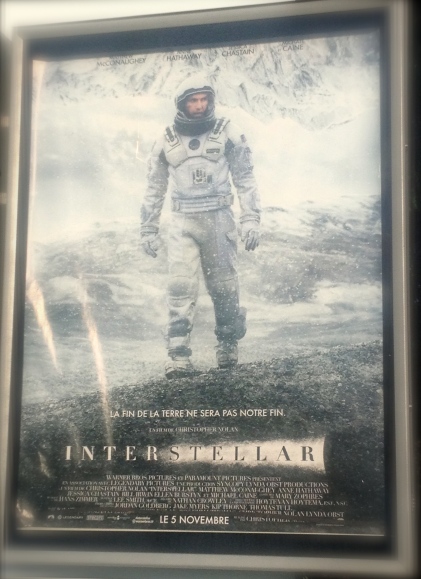 Yesterday I thought I better grab the opportunity to go and see one of the other two movies in VO (Version Originale).  So as I previously mentioned in my last post, I knew nothing about Interstellar apart from the director, lead actor and the setting.  It’s a long movie – nearly 3 hours and surprise surprise it easily held my attention throughout.  It’s definitely one of the best films I’ve seen this year (although admittedly that isn’t many) and the only one that is destined to have wide appeal.

The only recent releases I’ve seen on the big screen apart from Magic In The Moonlight (the other VO movie) have been films I saw in London – the abrasively scored and generally all round freaky Under The Skin featuring an often naked, brunette Scarlett Johansson.  The other was Cronenberg’s Maps to the Stars that was a disturbing yet blackly comic treatise on the trappings of Hollywood and all that engenders. It features a standout performance from Julianne Moore as a fading actress and her hard to forget toilet scene. 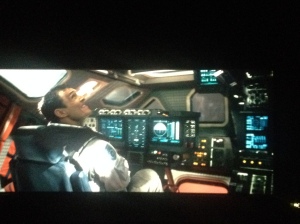 Cooper in his element

Interstellar is beyond doubt a visually stunning science fiction film with a thought provoking plot that makes for a great save the earth tale.  This film appears to be more emotionally driven than Christopher Nolan’s usual fare but that doesn’t take anything away from the film for me.

Overall Interstellar combines a really expansive feel, and this perhaps comes from Nolan using real film recording in lieu of digital, with a certain level of intimacy as you get to understand the motivations of the characters. Matthew McConaughey (Cooper) is amazingly watchable throughout. I adore his southern drawl. I also love seeing Michael Caine on the screen – a Nolan regular. Anne Hathaway and Jessica Chastain play two strong characters and reliably deliver typically solid performances. The young actress, Mackenzie Foy who plays Cooper’s daughter also gets some great scenes.

Go and see it. Interstellar will take you on a space odyssey that will give you three hours out of the daily grind where you can just sit, dream and wonder.

Have you seen it?  What did you think?

4 thoughts on “Caveat to the Lure of the VO film: A Space Odyssey”